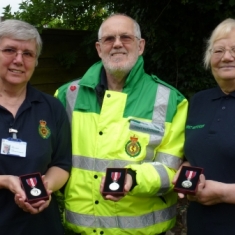 Community First Responders (CFRs) attend emergency 999 calls and are fully trained and equipped to deal with a wide range of potentially life threatening conditions until the arrival of an ambulance.

As every day members of the general public, CFRs volunteer their time freely to help care for people and save lives within their community, supporting the regular Ambulance Service.

Very often the role is reassurance, but in extreme circumstances they can perform CPR (cardio-pulmonary resuscitation) or use of a defibrillator to restart someone’s heart.

Often in rural areas, CFR’s are generally dispatched at the same time as the ambulance but can arrive before, which can make the difference between life or death in situations such as cardiac arrest where a positive outcome reduces by 10% every minute that effective CPR and defibrillation are delayed.

If you would be interested in attending a ‘Headstart’ course as an individual or group, then why not get in touch.

The CFRs scheme can be incredibly rewarding as responders could well end up saving someone’s life. Many villages where schemes exist show great community spirit knowing that there are people there who could be lifesavers.

Anyone who lives or works in the North West can get involved with the scheme, whether it’s to be a First Responder, or to help with other vital tasks such as fund-raising, support or administration.  Volunteers do not need previous first aid experience to join their local group, as full training would be provided.

How To Find Us